Last year, around 115,000 speeding fines of over £100 were issued by the magistrates. This is after £2.1 million of our taxpayer money went into new camera technology supposed to increase our safety on the roads. So why did the number of drivers that received a speeding fine go up by 50%?  Do they increase safety or is it all just a money making scheme? 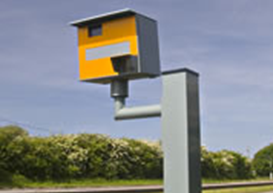 There have been two major developments in the world of UK speed cameras. One of them is the digitisation of the existing speed camera network. This time last year your standard speed camera used physical film to capture speeders in the act. Although this worked to a point, a time would always come where the film ran out and had to be changed. It’s during these periods that thousands of speeding drivers could avoid receiving tickets.

This no longer the case though as the rollout of a new generation of digital speed cameras has begun across the UK. These cameras have no physical film to change, meaning they can try and catch speeding drivers 24/7, 365. This has led to an increase of over 50% in the amount of speeding fines issued to drivers in the past year alone. This isn’t even the most interesting development in the world of speed cameras though…

Drivers all over the country are getting worked up about new ‘stealthy’ speed cameras. The Highway Agency Digital Enforcement Camera System 3 (Hadecs3) has been operational on the M25 between junctions 5 and 6/7 since last October and has already caught over 1,500 drivers. It’s also going to be introduced to the M1, M3, M60 and M6 over the next two years.

These new cameras are grey and can be very difficult to spot, which is why many drivers and the media are calling them ‘stealth’ speed cameras. The system’s use of dual radar along with lane and vehicle identification allows it to monitor up to five lanes of traffic simultaneously for any vehicles exceeding the variable  speed limit.

Hadecs3 are only going to be installed on ‘smart’ motorways, where varying speed limits are usually in practice and the hard shoulder is often used for regular traffic. This means, when the speed limit changes to 50mph, the cameras will also be adjusted to 50mph. This combination of changing speed limits and hard to spot cameras has the potential to trap many unaware drivers.

Is It About Road Safety Or Does It Come Back To Money?

Are these cameras the next step towards making our roads safer by deterring drivers from speeding? Many road users think not. They believe it’s a revenue-raising tool to gain the government millions of pounds. The Association of British Drivers believes the Hadecs3 will “punish drivers rather than make roads safer”.

452,540 speeding fines were issued by magistrates between 2009 and 2013. This generated roughly £45 million for the treasury, paid for by drivers just like you. As more of these cameras are introduced, we can expect to see a lot more drivers getting caught speeding and even more revenue to be generated for the government.

As if this wasn’t enough, there is also a proposal to increase the maximum penalty for speeding on a motorway. If caught doing so, you could be fined up to £10,000. That’s four times the current penalty of £2,500. However, the magistrates have claimed that sentences will always be “reasonably affordable”. This means drivers living on benefits could receive a lower penalty because they may be unable to afford the full £10,000.

Maybe it’s just bad timing, but with both the increase in fines and the new ‘stealth’ cameras, we can see how it may look like the Government just wants our money.

If you’re unlucky enough to be one of the thousands of drivers expected to get hit with a speeding fine by Hadecs3, the minimum you’ll face is a fixed £100 fine and three points on your licence. Although we hope this doesn’t happen to you, if it does we can help. We offer highly competitive car insurance for drivers who have been caught speeding, so there’s no need to pay any more than you have to.

Road safety and technology aren’t just clashing in the UK. The U.S. authorities have recently been battling against a Google owned navigational app called Waze. The app, available in 30 countries including the UK, allows users to socially update road and traffic conditions including pot holes, crashes, road works and even speed cameras to alert other app users.

The U.S. authorities have raised a number of concerns over how the app can be used. A major worry is that it encourages drivers to use mobile phones while driving, which in turn increases the risk posed to other drivers.

However, most publicity is centred on their claims that the app can be used by criminals and terrorists to evade and even target police officers. This is because the app allows users to identify, and alert others to, where police cars are located on the map. Some police chiefs in America believe that the app could be “misused by those with criminal intent to endanger police officers”.

What Do You Think?

Do you think the new speed cameras are going to improve road safety for everyone, or are they just the Government’s latest scheme to get hold of our hard earned cash? Also, do you feel advancements in technology are making our roads safer? We’d love to hear what you have to say on the matter, share your opinion in the comments below.